Where are you in the Pecking Order?

Maybe you’ve never been around chickens very much. This is where the term comes from. In the mid-1920’s a German author described the hierarchical structure of chickens. “Defense and aggression in the hen is accomplished with the beak.” The ones with higher authority peck the others with their beak. Fun to watch in chickens. Not so fun when you’re the one being pecked.

Some companies have tried to eliminate the pecking order. One modern online retailer had attempted to get rid of the corporate hierarchy. However, some recent articles about the company have indicated that they’re experiencing an extremely high level of departures and turn over. I’m always hesitant to attribute a statistic like that to any one issue. But, one article I read indicated that the CEO wrote a very long memo offering employees three months’ severance if they felt that self-management and self-organization were not a fit for them. Ouch, that felt like a peck to me.

I found two Stanford studies interesting. One concluded that egalitarian work structures were disorienting while hierarchical structures were more predictable and easier to understand which made them preferable. Another study said hierarchical structures had more staying power because they were practical and psychologically comforting. Now you could argue that predictable, practical and comforting are not the characteristics that will carry the corporation through the 21st century. You may be right. But, I believe there is a deeper issue than just structure.

Trust is the Deeper Issue

Many of my corporate clients have asked me at one point or another about their organization structure. The basic question is “Should we be centralized or de-centralized?” My unsatisfactory response is that it doesn’t really make any difference. Every corporate structure is an artificial attempt at organizing people. There are positives and negatives to each approach. The most important is Trust. If there is a lack of trust in the organization any structure will be used for protection, security, and enforcement. If there is a great deal of trust in the organization, the structure seldom gets in the way, people simply want to work better together regardless of what the structure calls for.

I’ve had a few people in my life that have pecked at me. Starting with my mother and including a few teachers and mentors. If I knew we had trust and they cared for me, I didn’t really mind the pecking. If the trust wasn’t there, I felt they were pecking me just because they had a big beak. 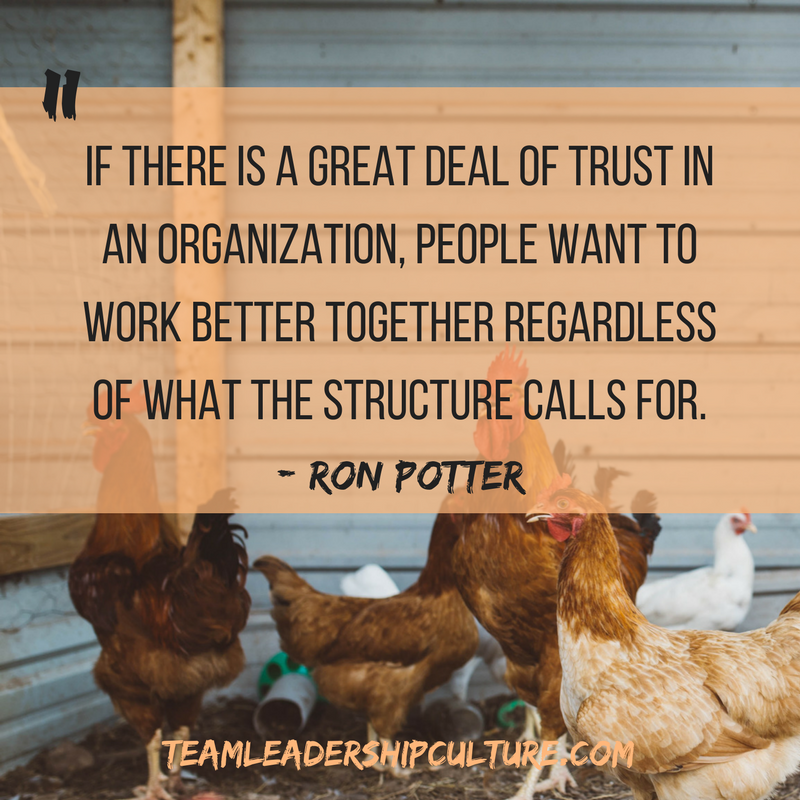