Yes, I have an engineering background and I know there are two halves to every whole.  However, the best way to start looking at the results of your culture survey is to look at each half: left vs right, top vs bottom. 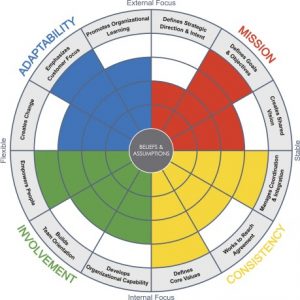 The right side of the chart: Mission and Consistency, creates very stable organizations.

The left side of the chart: Adaptability and Involvement, creates very flexible organizations

The trick is to exhibit the right amount of each half depending on your situation.  I’ve seen a couple of companies do this the wrong way.  Both are companies that are over 100 years old and during that time have been the largest company in their industry.

One of the companies took an approach that was way too stable for their changing environment.  As they lost market share and profitability over several years their approach was to “do things the way we’ve done them for over 100 years.  That approach has weathered downturns in the past and will do so again.”  Unfortunately, it didn’t weather the downturn and they became a small provider in the industry as other companies took the innovative lead.

Another company that was also over 100 years old knew they were falling behind the competition.  They hired a “visionary” CEO from a very different industry to help them innovate their way back to a leadership position.  This leader lept to a vision of the future that was so far beyond their current position that most people complained they didn’t even know what he was talking about.  Consequently, they continued with a “business as usual” approach because they had not been prepared to function differently then they had for many years.

Just like many sports teams, companies often go into a prevent defense posture once they’ve gained the lead.  There is great fear in the organization of losing the gains that have been made so they try to protect their current position.

Because most leaders don’t want to be labeled as the ones who lost the gains that have been made over several years, I see more of this issue rather than the case of trying to leap-frog forward to an entirely new position.  Becoming an innovator is tough to pull off if your company has not been prepared to let go of old habits and products in favor of a new, innovative approach.

This issue was made very relevant to me when my children were in about the fifth grade.  If one or both of them (they were two grades apart) were having difficulty with a particular subject in school they would turn to me for some help.  However, as I began to explain the issue from my level of understanding or education, their eyes would glaze over and they would finally toss their homework on the table and tell me that I was no better than anyone else at explaining the issue from their level of understanding.  I then asked to see their textbook and read one or two chapters ahead.  Once I remembered the concept that needed to be learned next, they usually responded with something like “Why didn’t you say that in the first place?  It all makes sense to me now.”  With that approach, I was astounded at how quickly they learned and advanced through the topic, often faster than their schedule dictated.

If you want your organization to advance quickly to the next level of understanding so that they can compete at an innovative level, show them the path.  Help them see one or two steps forward.  You’ll find that they will get quicker with each step along the way until you (and they) realized that they’ve turned into an innovative organization.

Need for Change and Innovation

Difficult to accomplish?  Yes, but necessary.  While some people think that leadership is easy, it never is.  Balancing stability and flexibility is difficult.  But that’s what it takes to be a leader.  Accomplish the impossible during the day then go home and be an ordinary family member at night.  It’s worth it but it’s not easy.

In our next blog post, we’ll take a look at the other two “halves” that are just as difficult.  Then we’ll take one last look at culture in general and how it impacts the bottom line.  Stay tuned for next week. 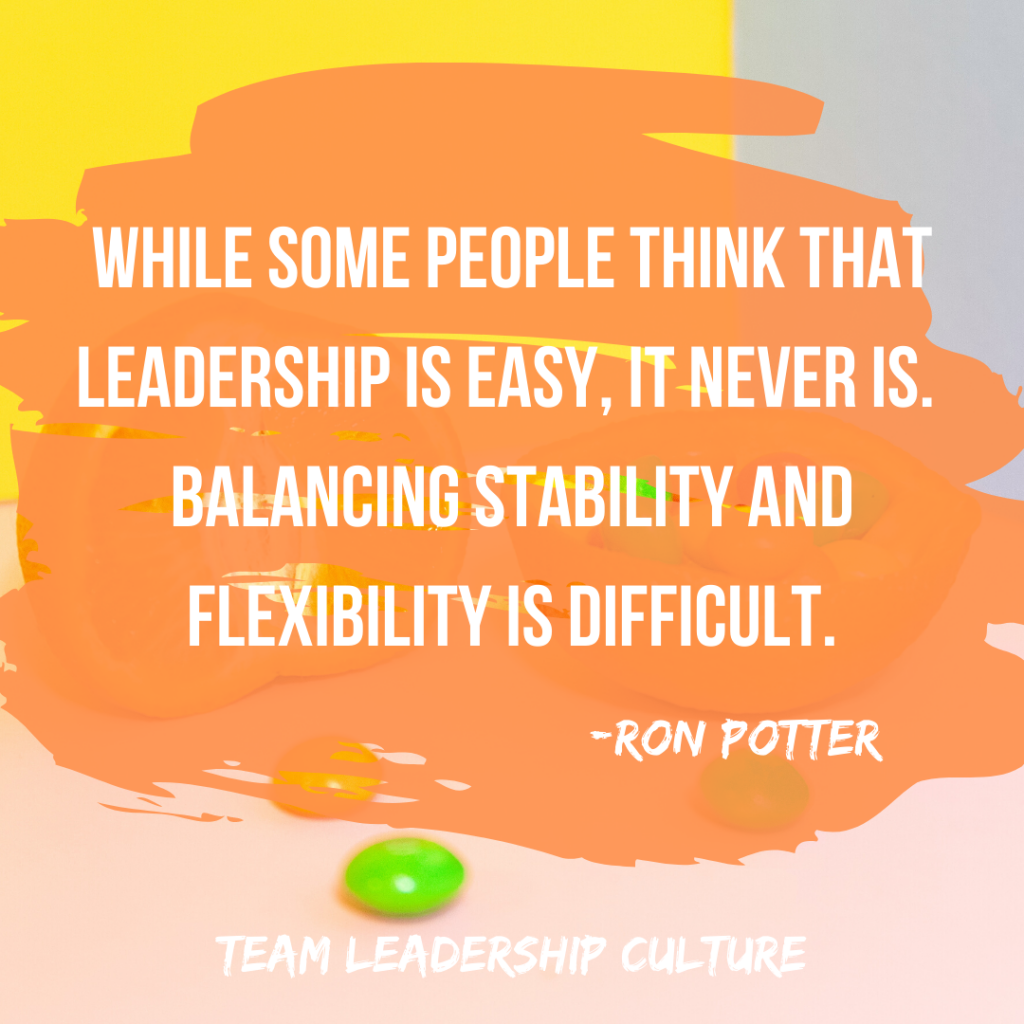 Culture: The Other Two of the Four Halves

The Power of Positive Feedback